The Steven G. Condos Award for Outstanding New Member to the College

The award has been presented annually since 2016 to an outstanding first-year member of the College. The Texas Bar College created the award in memory of Steve Condos, one of the original Charter members of the College who served as an influential and hardworking member of the first College Board shortly before his untimely death. 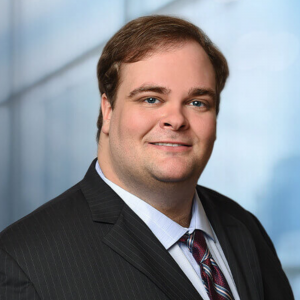 J. Collin Spring (“Jay”) is a Litigation Associate in the Dallas office of Quilling, Selander, Lownds, Winslett & Moser, P.C., where his practice focuses on commercial litigation, insurance coverage, and professional malpractice matters. He is licensed in both Texas and Louisiana, where he maintains an active practice in both state and federal courts.

Jay is actively involved in the Dallas legal community. He coaches one of SMU Law School’s top mock trial teams, focusing his efforts in particular on training his students to understand and apply the Federal Rules of Evidence effectively. He serves on the hosting committee for the Dallas Association of Young Lawyers’ annual Alexander Bolton Charity Ball, which recently surpassed its all-time record for funds raised. Since 2019, Jay has been a member of the Patrick E. Higginbotham American Inn of Court, first as a Pupil before being invited back for two terms as an Associate.

In his first year of practice, Jay co-authored a paper presented at the State Bar of Texas’ annual Advanced Insurance Law Course. He has also written on recent developments in the law for the State Bar of Texas’ Insurance Law Section website. Jay has also authored two longer works which have been published by the SMU Law Review and the Journal of Air Law and Commerce.

Jay graduated tenth in his class from the SMU Dedman School of Law, receiving his degree magna cum laude. While at SMU he served both as a Comment Editor on SMU Law Review and as a member of the executive committee for the advocacy board. As a student, he served as an extern to the Honorable Catharina Haynes of the United State Court of Appeals for the Fifth Circuit and to the Honorable Elizabeth Lang-Miers of the Texas 5th Court of Appeals. He also held a number of other positions, including serving as the Elections Chair for SMU’s Student Bar Association and working as a research assistant for five of the six semesters he spent in law school.

Jay makes sure to give back to his community. He currently serves as the President-Elect of the Dallas Theater Center Guild, the official fundraising and support organization for North Texas’ leading theatre company. Previously he served as a committee chair and member of the Guild’s Board of Directors for several years. He also regularly volunteers to judge legal advocacy competitions at the high school, undergraduate, and law school levels.

As a young man, Jay learned the importance of contributing to his community and to the profession from the late Judge Bob O’Donnell, his grandfather, who presided over the 301st Judicial District Court in Dallas County, Texas. Jay would like to dedicate this award to his grandfather’s memory.